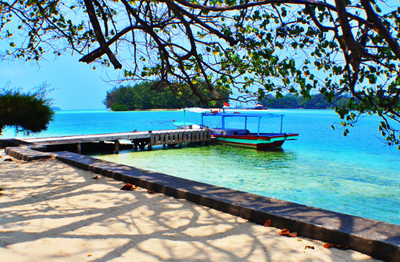 A vacation in Panjang Island offers a distinct nuance. Why is that? As the name implies, the island represents its shape. Panjang means “long”. It is also the home of a small airport with the size of 1400 x 23 meters. This airport covers almost the entire part of the island. The government has an agenda to enlarge its size, actually. Despite this issue, the island also attracts some visitors. Tourists keep coming for an island hopping. It is a worthy vacation destination for everyone.

The Nuance
In terms of appearance, the island consists of a lowland and white sandy shorelines. There aren’t many types of trees in Panjang Island. It is because of the airport. Still, you can see some bushes and thatch. There are several pemphis trees, too. They are an endangered species, though. When it comes to animals, you can see black crows, small birds, and lizards. What about the sea? It consists of both light and dark blue seawater.

Exploring Panjang Island
Once you reach Panjang Island, you can see a majestic airport. Despite its small size, it has attracted numerous visitors. In the past, the airport has a significant story. You can learn it from your tour guide, actually. In the past, many small planes used it for an emergency landing. The last landing was in 1997. Due to its inefficiency, the airport was abandoned. Later, the government decided to renovate it in 2006. Today, it can be used by a plane with up to 50 passengers.

Apart from learning its history, tourists are allowed to explore the airport. That means you can use your camera to take some pictures of it. Somehow, it becomes a good background for selfies. If you are a photographer, Panjang’s Airport should be worthy for you. Thus, don’t forget to carry a camera! No worries. There is no fee at all. What you need are a good camera and stamina. It is because you are going to walk to explore the airport.

It is true Panjang Island consists of mainly an old airport. That doesn’t mean you can only enjoy such attraction. The thing is there are other attractions as well. These include white a sandy beach and nearby islands. Near to Panjang, there is a tiny isle. In midst of such island, you can find a lonely tree. It is quite a sight. You can even reach such petite island. It feels like you are in a deserted location. A boat can bring you there!

How to Get There
A trip to Panjang Island takes much time. If you use a regular boat, it is about 3 hours. Mostly, tourists depart from Muara Angke. It can be faster if you use a speedboat. This way, the trip only takes 1.5 hours. One thing, you should have prepared numerous things. These include money, refreshments, extra clothes, and a camera. In some cases, you also need to hire a tour guide. It will be helpful later.